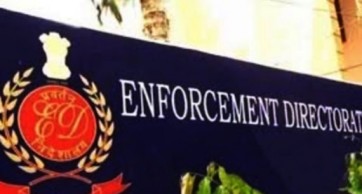 Hyderabad, Aug 1 (IANS) Casino organiser Chikoti Praveen Kumar and his aide Madhava Reddy appeared before the Enforcement Directorate (ED) on Monday for questioning in connection with the alleged violation of the Foreign Exchange Management Act (FEMA).

Praveen and Madhava Reddy reached the ED's regional office here in Basheerbagh in response to the notices served on them last week.

The ED officials were reportedly questioning them about the financial transactions with punters taken to Nepal, Sri Lanka, Thailand, Indonesia and other countries for casinos. The agency is also probing the suspected transactions of the organisers with some celebrities and politicians.

The ED officials were also quizzing travel agent Sampat, who allegedly helped Praveen and Reddy in arranging the air travel of the punters from Telangana and Andhra Pradesh.

The agency is focusing on alleged hawala transactions by Praveen and his aides. They allegedly used hawala routes to make the payments received from the punters, to arrange money for gaming and also to bring back their profits from abroad.

The agency has reportedly identified four hawala operators and they will also be questioned by the officials.

Last week, the ED searched houses, farmhouses and other places belonging to Praveen and Madhav Reddy in both the Telugu states. The ED reportedly found evidence of Praveen's transactions with some actors of Tollywood and Bollywood and also with some politicians.

Praveen had allegedly taken 10 celebrities to Nepal. He also made promotional videos with the celebrities for 'All In' Casino Vegas by Big Daddy at Hotel Mechi Crown Jhapa in Nepal.

The casino organisers allegedly arranged special flights to take punters to Nepal in June. For the four-day package, each gambler was charged Rs 3-5 lakh towards flight charges, hotel stay, food and entertainment.

The central agency seized a laptop and mobile phones of the suspect.

They are suspected to have facilitated the transfer of the stakes at the casino, running into lakhs of rupees, through hawala channels.

Praveen had denied the allegations. He claimed that he was never involved in any illegal activity. Responding to the ED notices, Praveen said the ED officials sought certain clarifications. "I will answer their queries," he had said.

Praveen and Reddy are also suspected to be involved in organising the casino at Gudivada town of Andhra Pradesh's Krishna district in January. The casino during the Sankranti festival in January this year had triggered a major controversy.

Popular as 'PC' in gambling circles, Chikoti is known for its flamboyant lifestyle. He displays this lifestyle on social media handles. He posted a video of taking his favourite pet python for a drive on his Range Rover car.

During the raid on Praveen's farm house, the ED had reportedly recovered dozens of exotic animals.

A forest department official said they will register cases against the owner of the farmhouse for keeping wildlife animals.