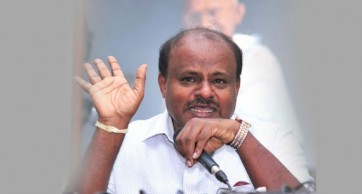 Kumaraswamy had slammed the ruling BJP for not meeting victim Muslim youths' kin.

The JD(U) leader first visited the family of Masood, a 19-year-old migrant labourer in Bellare town who was killed on July 21.

Masood's family had pleaded that their son was a victim and that they were not given justice.

The former chief minister also visited the family of 31-year-old Praveen Kumar Nettaru, pacified his wife and parents and pledged his support in the fight for justice.

He also gave his personal number and asked them to contact him in case of financial crisis.

Besides, Kumaraswamy also met the family of 23-year-old Mohammad Fazil Mangalpet and offered his condolences to them.

Kumaraswamy issued a Rs 5 lakh cheque each to all three victims' families.

A delegation headed by Opposition leader in the Legislative Council B.K. Hariprasad had visited the houses of all the three victims on Sunday. When the team visited BJP activist Praveen's family, people raised slogans against the Congress party. They had shouted that the Congress leaders would ensure that killers of Praveen get bail and expressed their anguish.