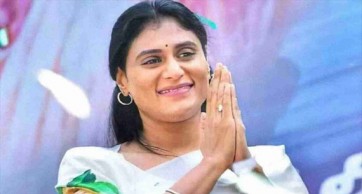 Chief Whip D. Vinay Bhaskar along with ministers Niranjan Reddy and Srinivas Goud and some MLAs met the Speaker and submitted the complaint. They said her remarks against the members amounted to breach of privileges and sought action against her.

Niranjan Reddy informed that a complaint was already filed against Sharmila to the Director General of Police (DGP).

Meanwhile, police in Wanaparthy registered a case against Sharmila for making personal remarks on Niranjan Reddy and for holding a public meeting without police permission, leading to traffic jam. The case was registered on a complaint by local TRS leaders.

Reacting to TRS complaint to the Speaker, Sharmila urged the Speaker to take action against minister Niranjan Reddy for insulting her and women like her with his comments.

In a series of tweets, Sharmila also sought action against Chief Minister K. Chandrasekhar Rao and his son and cabinet minister K.T. Rama Rao. She said before taking any action against her the Speaker should act against Rama Rao who made inappropriate remarks about the hunger strike she is undertaking every Tuesday on the problems of unemployed youth.

Sharmila also posted a video of the chief minister and urged the Speaker to first take action against him for making objectionable comments on several occasions.